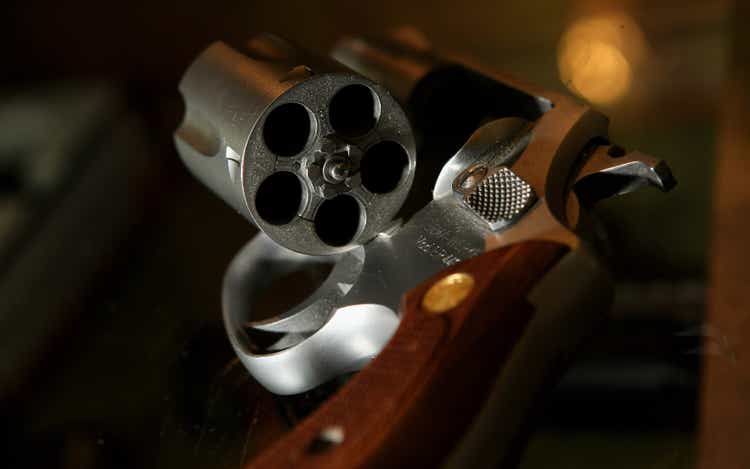 Smith & Wesson (NASDAQ: SWBI) in its long history has proven not to be a good long-term investment. Its price per share has historically fluctuated widely and today the company trades at the same prices as in 2007. The reasons for this discontinuity are mainly due to the profitability of Smith & Wesson’s core business, which is often affected by exogenous elements that can have a positive or negative effect on the result. I consider buying this company a good choice only for good short-term profits when bought at a heavily discounted price, such as in mid-2019. Favoring long-term investments, I cannot rate this company as a buy, but considering that its intrinsic value calculated via a DCF turns out to be higher than its current value, my rating is a hold.

Smith & Wesson Brands is a well-known American company that has been manufacturing and marketing guns in the United States and internationally for 169 years. In order to best understand the growth and profitability margins of this business, one must first understand the profitability and growth of its industry. The sector in which this company operates offers few opportunities because it is already saturated and subject to many regulations: the sale of arms, although legal, is still a difficult business to manage. The growth rates of this sector are rather limited since not everyone has the will to buy weapons. Buying weapons for self-defense or hunting, for example, may be suitable for a number of people, but it is unlikely that in the future many people will change their minds and suddenly start buying weapons . Smith & Wesson itself has stated in its annual report that growth rates are generally low and that a sharp increase in demand may only be possible in the short term due to exogenous events. However, the growth triggered by exogenous events is short-lived, so it returns to the same levels as before the growth.

The Small Arms Market was worth $8.39 Billion in 2020 and is expected to reach $13.75 Billion by 2030 (CAGR 5.4%). However, given that 97-98% of Smith & Wesson’s revenue comes from sales in the United States, it is best to look at the growth of the small arms market in the United States rather than internationally. In 2020, this market was worth $3.33 billion and is expected to reach $5.81 billion by 2030 (CAGR 6%). A growth rate of 6% would not be that low, but you have to consider that these are only estimates and that there may be several changes governing the possession of small arms within eight years. . Overall, I consider that the demand for Smith & Wesson products is solid but fragile at the same time: solid because the brand is now established and there is a guarantee on the quality of its products, but fragile because it there could be external regulations or laws that could adversely affect this business. As long as the situation remains the same, there should be no problems, but we must always consider that we can never expect high demand growth rates, even in the best of times.

Regarding the profitability of this activity, we can certainly say that it is variable. Smith & Wesson’s net profit margin (excluding extraordinary items) was 24.6% in LTM, but the average for the past 10 years is 12.55%. There are years when the margins are well above average and others when it is the opposite. But what does it depend on?

What has been the turnover of Smith & Wesson over the last decade?

As explained above, Smith & Wesson’s revenues are highly variable from year to year. There is however a slight improvement if we consider a very long time horizon but by comparing a given year with the next it is not possible to find a correlation. Commodity prices are constantly changing, which makes gross profit too discontinuous. For the first time in 169 years, the company was able to make a net profit of over $1 billion, but I suspect that this milestone will probably not be repeated in the next annual report after the recent increase in inflation.

Overall, I find the profitability of this business to be low as it is too influenced by commodity changes and exogenous events. Additionally, demand for these products is not expected to grow significantly over the long term, so growth margins are also an additional weakness. All of these weaknesses make Smith & Wesson an unsuitable investment for a long-term horizon; in fact, the current price per share is the same as in 2007.

What is Smith & Wesson worth?

Smith & Wesson’s valuation will be done through a discounted cash flow, in order to give a present value to future cash flows. This model will be composed as follows:

According to this model, Smith & Wesson has a fair value significantly higher than its current price. The fair value is $36.01 while it is currently trading at $14.19. Even applying a 30% safety margin, the company continues to be considered discounted.

If the discounted cash flow is favorable to Smith & Wesson, it should nevertheless be noted that this model does not take into account the numerous exogenous risks with which the company may be confronted. In this case, my opinion is paramount: I would not buy the company because of the risky nature of its activity, but if I already had it in my portfolio, I would not sell it because it has a much higher intrinsic value. at its current value.

impact on inflation: Inflation reaches its highest level in 8 years! Here’s what that means for the economy, stocks and bonds